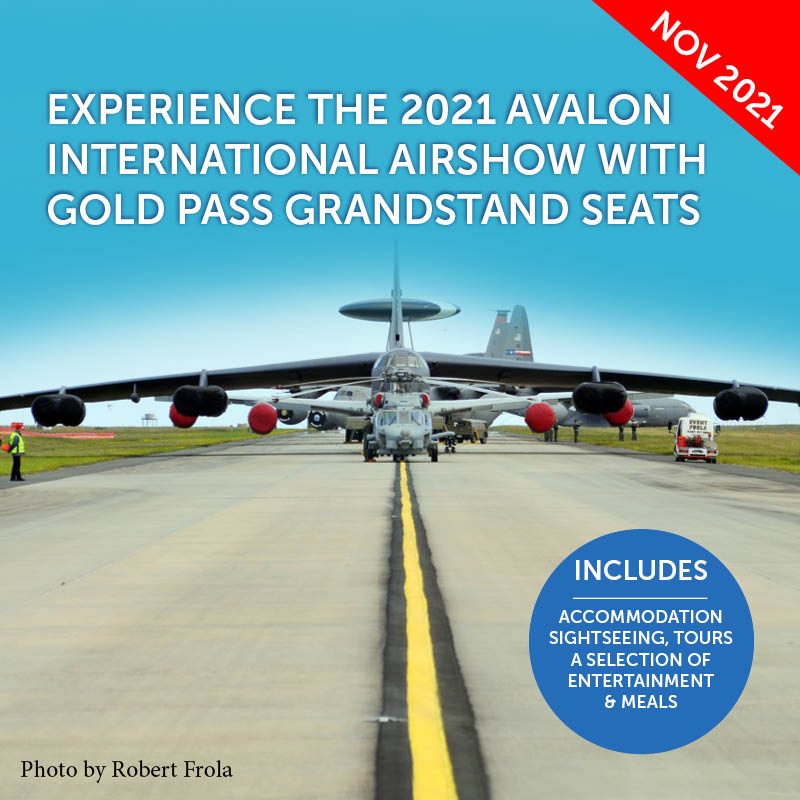 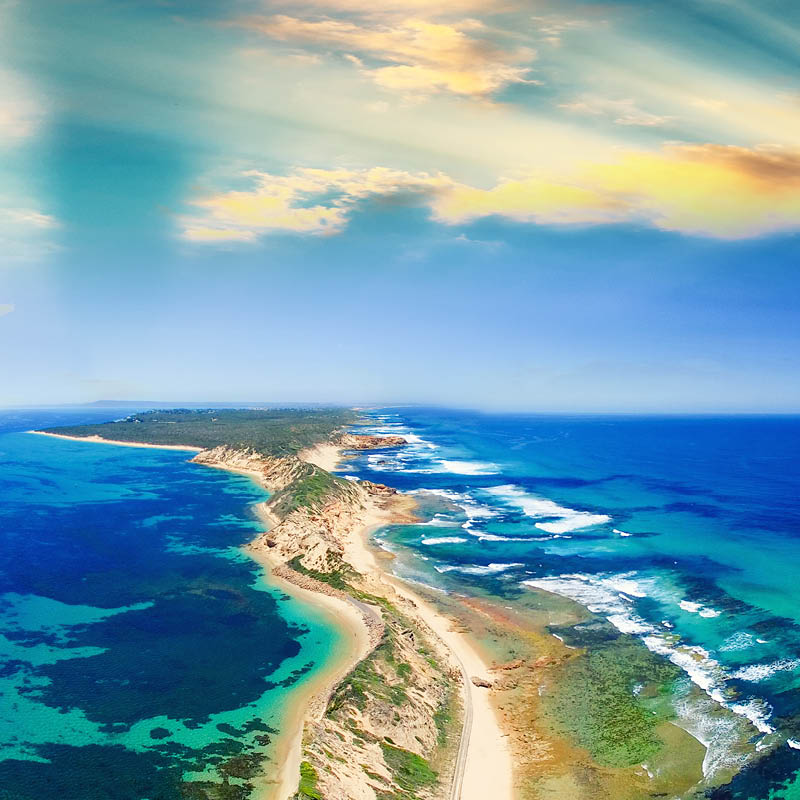 FROM
$3,995
pp twin fare
$5,290
single fare
Book tour Download BROCHURE
TOUR INFO
The tour will be a great opportunity to experience the 2021 Avalon International Airshow with Gold Pass Grandstand seats. Celebrate the Centenary of The Royal Australian Air Force at the show in 2021! See the largest variety of RAAF assets ever assembled at Avalon, including historical and modern aircraft spanning the 100 Years of the Royal Australian Air Force. The tour will also take the opportunity to visit the many aviation and military museums that Victoria has to offer! 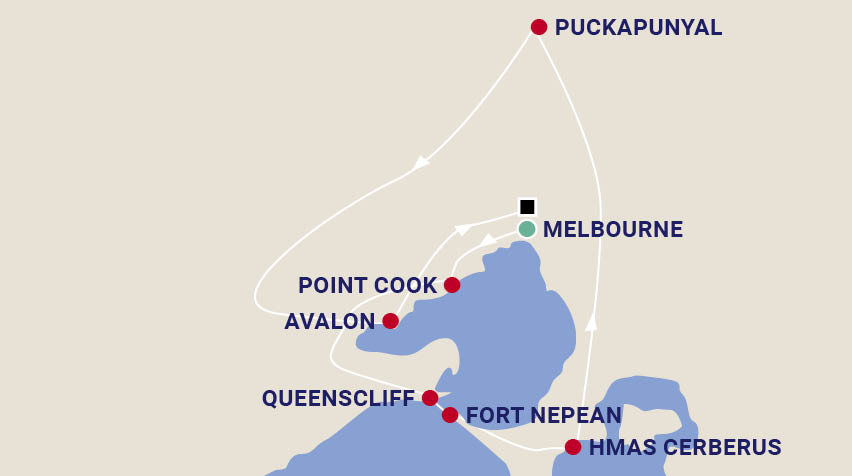 DAY 1 Friday 26 November 2021 Melbourne
This afternoon the group will meet at our central Melbourne hotel.

DAY 2 Saturday 27 November 2021 Melbourne
This morning we first visit Victoria Barracks. Victoria Barracks was the administrative headquarters for the Australian Army for many years and the headquarters of the navy and airforce during WWII. The earliest buildings at Victoria Barracks were built by soldiers in the late 1850s, with the original bluestone buildings being constructed between 1856 and 1872. A large extension was made to officers’ quarters in 1917. We will see the cabinet room where many important decisions where made during the war and original WWII maps are still displayed. We also see the Defence Secretariat Offices, including the defence minister’s office and the Prime Minister’s office. We then visit the Shrine of Remembrance. Began in 1927 and completed in 1934 it is in classical style influenced by the Tomb of Mausoleum at Halicarnassus (One of the original Seven Wonders of the World). The Shrine is Victoria's national memorial honouring the service and sacrifice of Australians in war and peacekeeping It is one of the biggest war memorials in Australia. We see the eternal flame and have a tour of the building and exhibitions. We also see some of the many memorials to Australia’s war and peacekeeping involvement and statues in the nearby Kings Domain. We then visit the Victorian Police Museum. From Australia’s largest collection of Kelly Gang armour to forensic evidence from Melbourne’s most notorious crimes, the Victoria Police Museum presents visitors with unique insights and surprises.

DAY 3 Sunday 28 November 2021 Point Cook
This morning we first visit the Royal Australian Air Force Museum at RAAF Base Point Cook, near Melbourne. Point Cook is the birthplace of the Australian Flying Corps (AFC), which was renamed to the Royal Australian Air Force following its success in World War I. The RAAF Base Point Cook was the Air Force's only base from 1912 to 1925. The RAAF Museum pays tribute to the history of the Air Force, and houses an extensive collection of memorabilia and stories of Australia's military aviation expeditions. Learn about the history of Air Force training, advancements in military aircraft, the role of Air Force personnel, women in the Air Force, local and overseas missions, and so much more. There is also an exciting collection of retired Air Force aircraft, such as those used for training, strike, reconnaissance, and air and sea rescues. We then visit the B24 Liberator that is being restored in Werribee. This is the only remaining Liberator in the Southern Hemisphere and is one of only eight still existent in the world. This intricate restoration work is proceeding in one of the impressive World War II hangars on the old Werribee airfield. It is the intention to eventually have the airframe completely restored. We then transfer to our hotel in Geelong.

DAY 4 Monday 29 November 2021 Fort Queenscliff and Fort Nepean
This morning we travel to the Victorian-era seaside town of Queenscliff. We first visit Fort Queenscliff. With over 150 years of Australia’s heritage on display, Fort Queenscliff is one of Victoria’s most important historic sites and one of the largest and best preserved forts in the Australia. We tour the fort and see the 19th century Coastal Artillery Fort with a range of guns, underground magazines, heritage buildings, a working lighthouse and a Military Museum which are contained within this large unique brick walled fort. After some time in the town of Queenscliff we take the ferry across Port Philip Bay to the town of Sorrento. We then visit Fort Nepean at the tip of the Mornington Peninsula. It was a critical part of Victoria’s defences from the 1880s until 1945. During the late 19th century the government decided that Victoria’s rich goldfields needed protection. Because of its strategic position, Fort Nepean became an important defence post. Numerous military fortifications were built, making Port Phillip one of the most heavily defended harbours in Australia. The first shot of the British Empire in the First World War and the first Australian shot of World War II were fired from Gun Emplacement 6, earning its entry into military history. These battlements were modified and used right up until the end of World War II. We then transfer to our hotel.

DAY 5 Tuesday 30 November 2021 HMAS Cerberus
Today we first visit The Museum of HMAS Cerberus. It features a large naval heritage collection of artefacts, photographs and memorabilia which steps you through the period of Victorian and Colonial Navies and through the history of the Royal Australian Navy including a German flag captured in New Guinea during WWI. We then visit the Victorian Maritime Centre at Crib Point before visiting the Australian Aviation Museum at Moorabbin. The Australian Aviation Museum is one of the oldest volunteer run Museums, with a collection of over 50 aircraft and engines and many relics. This is the most complete and important collection of Australian built aircraft, with some examples being the oldest surviving ones in the world.

DAY 7 Thursday 2 December 2021 Melbourne
Today we first visit the Australian Signals Museum at Simpson Barracks. The Australian Army Signals Museum collects, preserves and exhibits the history of the Royal Australian Corps of Signals. the museum collection ranges from World War 1, World War and Vietnam War through to current deployments overseas. We then visit the TAA museum The Trans-Australia Airlines Museum is the only aviation museum dedicated to the preservation of Australia's domestic aviation development, and formally recognises all participants in aviation development in this country. We then visit the Civil Airways Museum. The Airways Museum is an aviation museum, but with one difference – there are no aircraft! Instead, the Museum houses a collection of national importance that traces the development of Australia's civil aviation airways system through innovation and technical development from it’s beginnings in the 1920s to today. The story is told through artefacts and photographs, and illustrates how Australia has often played a leading role internationally in aviation development.

DAY 8 Friday 3 December 2021 Avalon Air Show
The skies above Avalon are set to erupt when the Australian International Airshow returns! It’s going to be a huge weekend of high octane excitement and fun for the whole family. Celebrate the Centenary of The Royal Australian Air Force at the show in 2021! This once in a lifetime event will bring together the largest variety of RAAF assets ever assembled at Avalon, including historical and modern aircraft spanning the 100 Years of the Royal Australian Air Force. And they’ll be joined by a cavalcade of civil aircraft including historic barnstormers, breath-taking aerobatics and the latest jet power from around the globe. Enjoy your Gold Pass grandstand seats for an amazing weekend!

DAY 11 Monday 6 December 2021 Departure
This morning we check out of our hotel and are transferred to Melbourne Airport for your onward flights. The tour concludes.

Touring can involve a considerable amount of walking and stair climbing in the places visited and it is important that all tour participants have a level of physical fitness that allows them to take part in this tour without the need of assistance from others.

International touring can involve a considerable amount of walking and stair climbing in the places visited and it is important that all tour participants have a level of physical fitness that allows them to take part in this activity without the need of assistance from others.

TOUR COSTS:
The tour costs are based on general transport, entry, and accommodation costs. Travelrite reserves the right to alter the costs if any of these factors change, giving any passenger that has booked the right to withdraw with full refund of monies paid or modify arrangements. No alterations to price will be made within 60 days of departure.

TRAVEL INSURANCE:
Travel insurance is recommended to cover the costs of cancellation fees due to illness, death in family, etc.

MINIMUM TOUR NUMBERS AND CONDITIONS:
The tour has been priced on the basis of a minimum number of passengers having booked 60 days prior to departure. Travelrite reserves the right to cancel the tour, giving a full refund of all monies paid or offer arrangements to proceed with the tour at a modified cost.

TOUR ORGANISATION:
Travelrite reserves the right to change advertised entrances if necessary for the smooth operation of the tour.

REFUNDS:
The tour is based on arrangements which do not allow for any refunds in respect to sightseeing, accommodation, meals, airfare or other services not utilised after the tour has commenced.

RESPONSIBILITIES:
Travelrite International Pty Ltd. (ABN 64 005 817 078) is the tour organizer. Travelrite acts only as an agent in the making of arrangements for hotels, transportation, restaurants or any other service and does not assume any liability whatsoever for any injury, damage, death, loss, accident or delay to person or property due to an act of negligence or a default of any hotel, carrier restaurant company or person rendering any services included in the tour, or by act of God. Further no responsibilities are accepted for any damage or delay due to sickness, pilferage, labour disputes, machinery break-down, quarantine, government restraints, weather, terrorism or other causes beyond their control. No responsibility is accepted for any additional expense, omission, delays, re-routing or acts of any government authority. The passage contract between the carriers concerned, when issued, shall constitute the sole contract between the carriers and the purchasers of this tour and/or the passengers. The right is reserved to withdraw any tour and/or make such changes in the tour as may be found desirable or necessary for the convenience of the parties and the proper carrying out of the tour. This contract shall be construed in accordance of the laws of the State of Victoria, Australia.

HOW TO BOOK:
Bookings can be made by completing a booking form and sending it with a deposit of $750 per person to:

Further information or a booking form can be obtained by contacting Travelrite International on the following numbers:
Toll Free: 1800 630 343
Phone: (03) 8803 6868
Email: balwyn@travelrite.com.au

ABOUT TRAVELRITE INTERNATIONAL:
Travelrite International Pty Ltd (ABN 64 005 817 078) is a well-established family-owned business that’s been operating in Melbourne’s eastern suburbs for more than 35 years. Travelrite International is a full member of the Australian Federation of Travel Agents (AFTA), is fully Accredited with ATAS (A10538) and IATA. As such they directly represent the major airlines of the world and all major domestic and international hotel, tour and transport operators.

“All the sightseeing tours were interesting and enjoyable with excellent commentary by local guides.”

“Well organised, excellent tour group leaders and the museums visited were the best parts of the tour.” 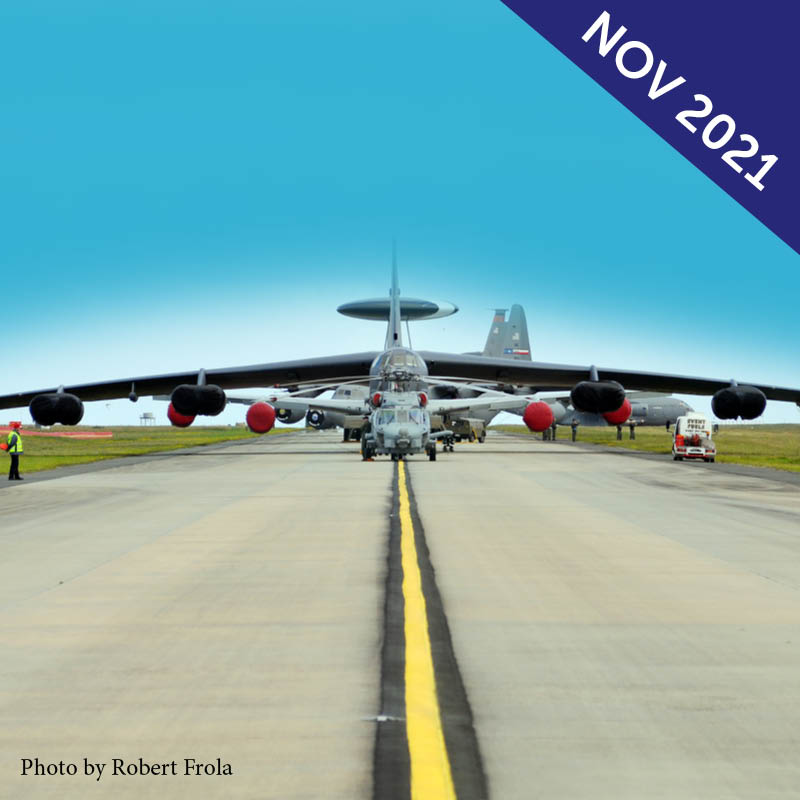