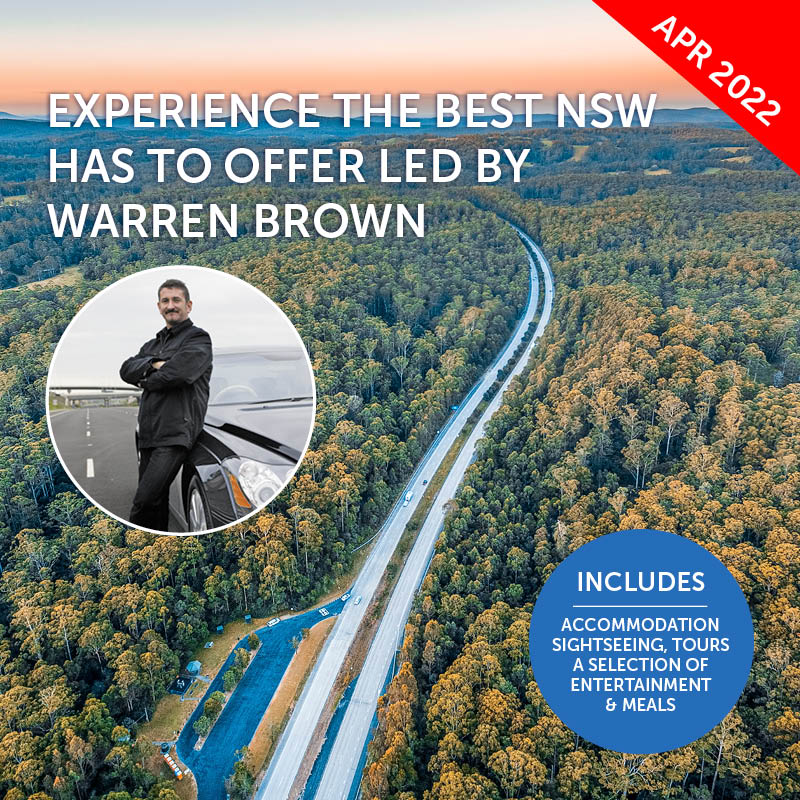 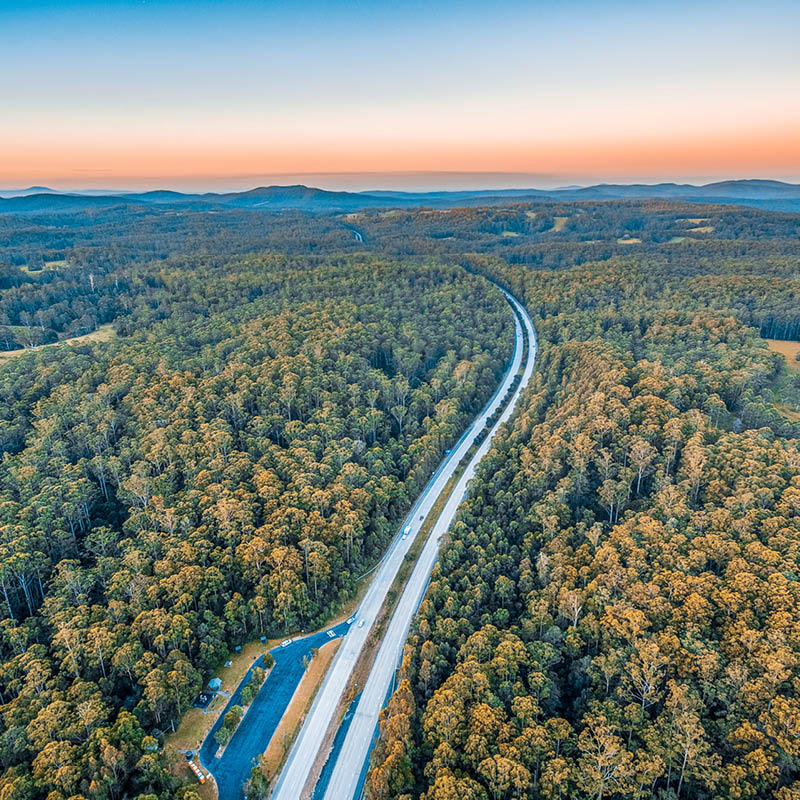 FROM
$4,950
pp twin fare
$6,045
single fare
Book tour Download BROCHURE
TOUR INFO
The tour will be a great opportunity to travel through country NSW and the ACT to visit the best Planes, Trains, Automobile and Military museums. Experience the best NSW has to offer with leadership by motoring (including Military Museums) and military enthusiast Warren Brown!

DAY 1 Sunday 10 April 2022 Sydney
This afternoon we check into our central Sydney hotel. This evening Warren will host a welcome dinner to mark the start of the tour.

DAY 2 Monday 11 April 2022 Wollongong
This morning Warren will take us to The Australian Army Museum of Military Engineering. It showcases the contribution of The Royal Australian Engineers to our nation's military history and involvement in virtually every conflict and peace mission. We then travel to the National Rail Museum Thirlmere which is home to a significant rail heritage collection, including over 100 rolling stock items, associated with the history of the railways in NSW. We then continue on to our accommodation in Wollongong.

DAY 3 Tuesday 12 April 2022 Wollongong
This morning Warren will first take us to the NRMA Motorlife museum where he is a patron. The museum showcases Veteran and Vintage cars. Warren will then take us to visit HARS – Historical Aircraft Restoration Society. A vast collection of aircraft including Australian Sabre, Canberra, two Vampires, Mirage III and an F-111C are on display.

DAY 4 Wednesday 13 April 2022 Nowra/Canberra
This morning travel to Fleet Arm Museum, Nowra. A repository of naval aircraft, we explore and experience the story of naval aviation from its beginnings to the present day. We then continue to Canberra where we spend the next three nights.

DAY 5 Thursday 14 April 2022 Canberra
Today Warren will take us to National Museum of Australia and depositary (subject to confirmation.) We will see in their transport section the Daimler landaulette that transported Queen Elizabeth around Australia during her first Royal tour in 1954, a 1925 Citroën tourer which was the first car to travel around Australia and the Sundowner Bean car, driven from London to Melbourne in 1928. Warren has written a book about this car and the man who drove it, Francis Birtles so he will be able to interpret it for the group.

DAY 6 Friday 15 April 2022 Canberra
Today Warren will take you to The Australian War Memorial and its depositary (subject to confirmation). We will see the extensive collection of Military vehicles and aircraft.

DAY 7 Saturday 16 April 2022 Temora
This morning we depart Canberra and travel to the town of Temora known for its aviation museum. This afternoon we will visit the Temora Rural Museum. One of Australia’s most outstanding rural museums, it will take you on a trip down memory lane. It also includes the Ambulance Museum.

DAY 8 Sunday 17 April 2022 Temora/Cowra
This morning Warren will take us to The Temora Aviation Museum. It is built on the site of the biggest and longest lasting RAAF Elementary Flying Training School during World War II. The Museum displays ex-military aircraft, which have a historical significance to Australia. The collection includes Sabre, Dragonfly, Birddog, Cessna O2, Vampire, Meteor and Canberra aircraft. We then travel to Cowra

DAY 9 Monday 18 April 2022 Cowra/Forbes
This morning we visit the Japanese Garden and Memorial in Cowra. Opened in 1979 to mark reconciliation between Cowra and Japan after Japanses POWs were interred in Cowra. We then visit the Glenfell Chrysler museum. The museum contains a unique display of Chrysler vehicles ranging from 1930 to 1981. It includes Chrysler, Dodge, Plymouth and many Valiant models. We then travel to Forbes and visit the Mc Feeters Car Museum. It displays a vast collection of meticulously restored motor cars. Cars range from veterans to custom cars, rare, common and just down right bizarre.

DAY 10 Tuesday 19 April 2022 Parkes/Bathurst
This morning Warren will takes us to Parkes to visit The Henry Parkes Centre. The centre contains the Parkes Motor Museum that has 25 cars on display; the Antique Machinery Collection which has a Silver City Comet carriage and 45 tractors; and The Kings Castle, a collection of Elvis' personal artefacts owned by Greg Page , the yellow Wiggle. We then visit the Parkes radio telescope which was made famous in the film “The Dish” for its role in the Apollo space missions. We then travel to Bathurst. We visit Ash’s Motorcycle Speedway museum. Memorabilia from Australian riders Bluey Wilkinson, Lionel Van Pragg, Gordon Guasco, Jason Crump, Leigh Adams, Chris Holder, Darcy Ward and many more. International speedway exhibits include Ivan Mauger, Tony Rickkardson, Chris Harris, Greg Hancock and more. The museum also has a large collection of bikes and sidecars from the old to the new. Posters, pictures, paintings, banners, ribbons, hats and other memories are also on display.

DAY 11 Wednesday 20 April 2022 Bathurst
Today Warren will take us to the National Motor racing Museum of Australia. See the constantly changing lineup of more than 100 racing cars and motor bikes from all eras that have made their mark not only on Mount Panorama, but across Australia. These include several Bathurst winning cars. We also see the famous Mt Panorama circuit. We then visit the Bathurst Railway Museum before we continue on to Lithgow to visit the Lithgow Small Arms Factory Museum. The museum contains a comprehensive display of machine guns, rifles, handguns and related items from around the world. Unique to this museum are Australian designed and produced experimental, prototype and pre-production weapons.

DAY 12 Thursday 21 April 2022 Singleton/Raymond Terrace
This morning we travel to the town of Singleton and visit the Australian Infantry Museum. The Australian Army Infantry Museum is the custodian WARREN BROWN Warren Brown is an Australian cartoonist and television presenter. He has been an editorial newspaper cartoonist since 1986. He is currently cartoonist for Sydney’s The Daily Telegraph, for which he also writes a weekly motoring column. In May 2005, Brown participated in a recreation of the 1907 Peking to Paris race using five 100-year-old cars. He also presented a fourpart documentary series about the event. Since 2006, he has acted as the overnight MC at Gallipoli on Anzac Day and the pre-service MC at the Australian War Cemetery at Lone Pine. In 2008, he was selected to be one of the presenters of Top Gear Australia on SBS TV, and continued on in Season 2 (2009). Brown is a keen classic car enthusiast. His friendly personality and passion for classic cars and history make him the ideal person to lead the tour. of Infantry Corps history and its customs and traditions. The Museum's collection ranges from the Australia's pre-federation state colonial armies and their first deployments overseas in the nineteenth century through to today’s twenty first century diggers. We then continue on to Raymond Terrace.

DAY 13 Friday 22 April 2022 Raymond Terrace
This morning Warren will take us to visit Fighter World. Fighter World is dedicated to preserving the proud history of fighter aircraft operations in the Royal Australian Air Force. It is a totally ‘hands on’ experience. Exhibited in two hangars, visitors can walk-around, touch and look into the cockpits of such famous aircraft as the Mirage III, the Avon Sabre, the Gloster Meteor, the first Vampire jet built in Australia and the mighty F-111. There is a Hawker Hunter, WWII Spitfire replica, a Messerschmitt replica and much more. This afternoon we visit the National Motorcycle Museum which is Australia's largest collection of vintage, veteran, and classic motorcycles with around 800 motorcycles on display. We then return to our hotel. This evening we have a final night dinner to celebrate the tour!

DAY 14 Saturday 23 April 2022 Sydney
This morning we return to Sydney where tour concludes.

Tour deposit fully refundable up to 45 days prior to departure

Flights are not included.

Touring can involve a considerable amount of walking and stair climbing in the places visited and it is important that all tour participants have a level of physical fitness that allows them to take part in this activity without the need of assistance from others.

Tour Costs:
The tour costs are based on general transport, entry, and accommodation costs. Travelrite reserves the right to alter the costs if any of these factors change, giving any passenger that has booked the right to withdraw with full refund of monies paid or modify arrangements. No alterations to price will be made within 45 days of departure.

Deposits and Payments:
A deposit of $750 per passenger for is required at the time of booking. Full payment will be required 45 days before departure for the Tour. Payment may be made by cheque or cash a 1.5% administration fee will be charged on payments made by credit cards.

Travel Insurance:
Travel insurance is recommended to cover the costs of cancellation fees due to illness, death in family, etc.

Minimum Tour Numbers and Conditions:
The tour has been priced on the basis of a minimum number of passengers having booked 45 days prior to departure. Travelrite reserves the right to cancel the tour, giving a full refund of all monies paid or offer arrangements to proceed with the tour at a modified cost.

Refunds:
The tour is based on arrangements that do not allow for any refunds in respect to sightseeing, accommodation, meals, airfare or other services not utilized after the tour has commenced.

Responsibility:
Travelrite International Pty Ltd. (ABN 64 005 817 078) is the tour organizer. Travelrite acts only as an agent in the making of arrangements for hotels, transportation, restaurants or any other service and does not assume any liability whatsoever for any injury, damage, death, loss, accident or delay to person or property due to an act of negligence or a default of any hotel, carrier restaurant company or person rendering any services included in the tour, or by act of God. Further no responsibilities are accepted for any damage or delay due to sickness, pilferage, labour disputes, machinery breakdown, quarantine, government restraints, weather, terrorism or other causes beyond their control. No responsibility is accepted for any additional expense, omission, delays, re-routing or acts of any government authority. The passage contract between the carriers concerned, when issued, shall constitute the sole contract between the carriers and the purchasers of this tour and/or the passengers. The right is reserved to withdraw any tour and/or make such changes in the tour as may be found desirable or necessary for the convenience of the parties and the proper carrying out of the tour. This contract shall be construed in accordance of the laws of the State of Victoria, Australia and any legal action must be undertaken in the State of Victoria.

How to Book:
Bookings can be made by sending full names and addresses of intending tour members with a deposit of $500 for the Auto Tour. Please send to:

Further information or a booking form can be obtained by telephoning Travelrite International on the following numbers:

“Excellent small group of people. Everyone got along”